The original setup for the TapecartFlasher is as simple as it gets: simply hook up 5V and GND from the Arduino, then connect the 4 remaining lines of the cassette port interface to D2-D5. I tried this on a breadboard first and it worked out of the box! The most complicated part here was the lack of a proper connector, so I just soldered leads to the Tapecart module.

When I read about the idea for the TapecartFlasher, I immediately wanted to create a simple adapter board for it. Besides tidying up the mess of cables, such an adapter should address another issue: the Tapecart actually expects a voltage of 7V on the the MOTOR line, because that is what the C64 provides – originally intended to drive the motor of the 1530 Datasette with 6V under load. While in practice the voltage provided by the Arduino pin seems to be just high enough to still work with the Tapecart, I would like to be sure.

As the MOTOR line doesn’t need to drive much of a load on the Tapecart, a simple charge pump circuit seemed to be the easiest and cheapest way to produce the required voltage. Using 2 diodes, 2 capacitors, and the PWM output from the Arduino, the supply voltage of 5V is (almost) doubled and then limited to 7.5V through a Zener diode.

The last item I added to the layout of my adapter board is a connector for a generic Micro SD module that is available on eBay for a very small price. Upcoming versions of the TapecartFlasher firmware will support up- and download of images directly from the SD card, further increasing the transfer rate. 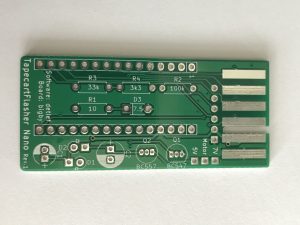 The adapter board comes as a shield for the Arduino Nano or compatible boards and is thus dubbed the “TapecartFlasher Nano”. The first prototype batch I ordered turned out fine. The board requires simple through hole components, only. This should allow anyone with some basic soldering skills to create their own adapter.

In its simples form, all that is required is an Arduino Nano that can either be soldered directly to the board or connected via two rows of 1×15 female socket strips. In this case the motor voltage must be set to 5V using jumper JP1. The other components are needed to raise the voltage of the motor signal. When those are fit to the board, the motor voltage can be set to 7V.

I tested the TapecartFlasher Nano with an early-access version of the firmware that I got directly from Detlef. I then modified the sketch further, adding the code to activate the PWM output on D9 that is needed for the charge pump.

Data upload from the PC to the Tapecart is controlled through a small GUI for Windows. A newly integrated console interface allows the data transfer between the Tapecart and the SD card. With my ATtiny44 based Tapecart – which is quite slow in calculating the CRC checksums – I measured somewhere between 4:10 and 6:50 minutes for a complete TCRT upload, depending on the setup. Quite some improvement!

Both the code for the updated firmware and the project files for the adapter board will be available once we are done testing. Also, PCBs for the SMD version of the Tapecart are on their way from China. So there will be more on the Tapecart topic, soon. Stay tuned!

Update 1: On closer inspection, the voltage on the motor line seems to be a tiny bit too high. A 6.8V Zener diode should be used instead of the 7.5V one.

Update 2: The project files for rev.1 and rev.2 of the TapecartFlasher board are now available on Github.