A couple of months ago I dug out my old Commodore hardware again and started tinkering with it – the goal being to finally try out a bunch of mods, hacks, and builds that I missed back in the day. To start with, I bought a cheap TFT display (, , a little harder to get on eBay these days) for around 13€ to connect to the C64 and C128. 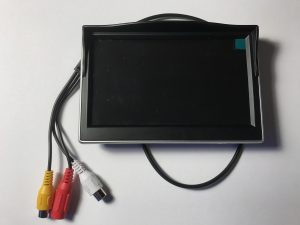 It was meant to sit on my work bench to e.g. quickly test a naked C64 board. It wouldn’t matter if the video quality wasn’t great. But after I made the necessary adapter cable and hooked everything up, I was a little disappointed to find out that the display wouldn’t show anything other than a black screen interrupted by an occasional flicker. I verified that the display itself was working by connecting it to a Raspberry Pi and I double-checked the cable I had made.

Doing a little research, I learned that the video signal produced by the C64 is actually not that great and that problems with modern displays are quite common. I got curious and used my (also very cheap) Hantek 6022 oscilloscope to take a look. The first thing that caught my eye was that the Commodore signal looked rather weak when compared to that from a RasPi.

So I thought if I amplified the signal, maybe I would get the TFT to display it. I did a little search on how to do this and stumbled across Raphaël Assénat’s page where he describes a problem very similar to mine. The interesting part is that his first impulse too, was to amplify the signal. But later he found out that the signal strength didn’t seem to matter much, it was the unorthodox v-sync sequence produced by the Commodore that confused his display. So he added a LM1881 sync stripper and an AVR micro controller to replace that sequence. Unfortunately, that contraption is very sparsely documented. 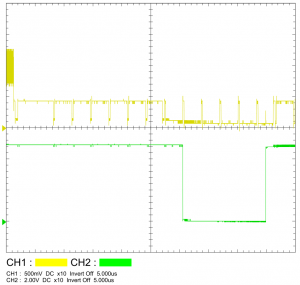 Since he mentions that just “removing” the sync sequence already resulted in a somewhat stable display and that amplification might not be necessary after all, I figured I might just try to get away without the AVR and the amplifier and  I came up with this reduced circuit: 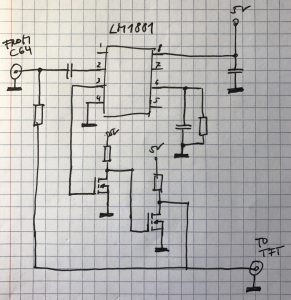 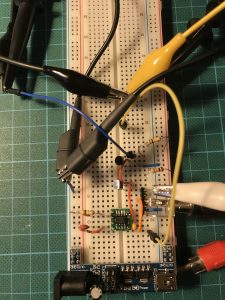 To my great delight and surprise, this yielded instant results! I hadn’t really hoped that this simple improvised circuit would be enough to make my display cooperate. 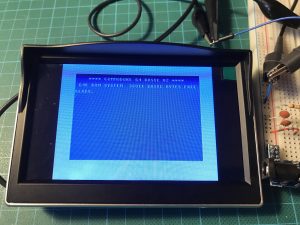 Of course, there are a few issues and to-dos left:

Do you have any thoughts or advice on this? I would love to hear in the comments!