Last year I created my own rendition of the SD2IEC, dubbed the SD2IEC Pluggable. Version 1.0 left some room for improvement and recently I found the time to take on a new revision. The new version 2.0 is even closer related to the design published by Shadowolf while maintaining the “pluggable” layout with the pass-through tape connector. 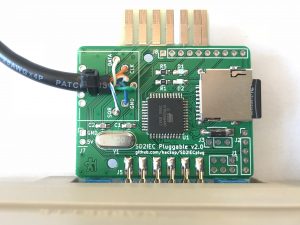 Most notably, the size of the PCB has been reduced by more than 50%. To achieve this, the SD slot has been replaced by the micro variant and the external USB power supply option was ditched. The components for the intended Tapuino integration — which never came to be — are gone, too.

Instead, there are new breakout connectors that were previously missing, giving access to pins for connecting external LEDs, disk switch buttons, an LCD daughter board, and device id selection. Here is the bill of materials:

Once the new version has been sufficiently tested and if everything seems to work, the project files will again be freely available.

Update 1: While it is generally working fine, there are a few minor issues in version 2.0 that I will address:

Update 2: Finally, after enough people kept nagging me, I managed to clean up the repository. So, the KiCAD project files are again available on Github in case you’d like to make your own pluggable SD2IEC. If you do, I would love to hear about it in the comments!

Update 3: In the meantime, an embarrassing though seemingly not very dire bug in the schematics of version 2.0 has been brought to my attention. 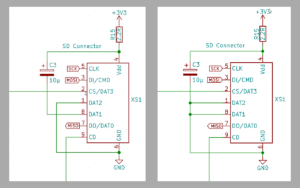 The flawed v2.0 schematic on the left, the corrected v2.2 to the right.

This has already been corrected in version 2.2, but if you are using a v2.0 board you can easily fix it using a small jumper wire on the bottom side of the PCB. 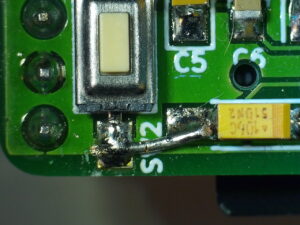