I’ve been meaning to build myself a mouse adapter for the Commodore 64 for quite some time. The recent release of the unofficial port of “Eye of the Beholder” for the C64 was a welcome excuse to finally get to work on this project.

The Mouse 1351 made by Commodore can be plugged directly into the control port of the C64 or C128 and it has two different operating modes. In joystick mode, the input from the mouse is compatible with that of a regular, digital joystick. In proportional mode, which is the default, it behaves and feels like any mouse used on modern computers.

Finding a working 1351 today can be difficult and somewhat expensive. This is where an adapter for more modern mice comes in.

Actually, creating such an adapter this is not a complicated endeavor, at least not for PS/2 compatible devices. The schematics and the firmware for such an adapter – based on the ATmega8 MCU – have been developed and published by Viacheslav Slavinsky back in 2009. The site is unavailable at the time of writing but a cached copy can be accessed via the Internet Archive. Also, the source code for the firmware is still available on Github. 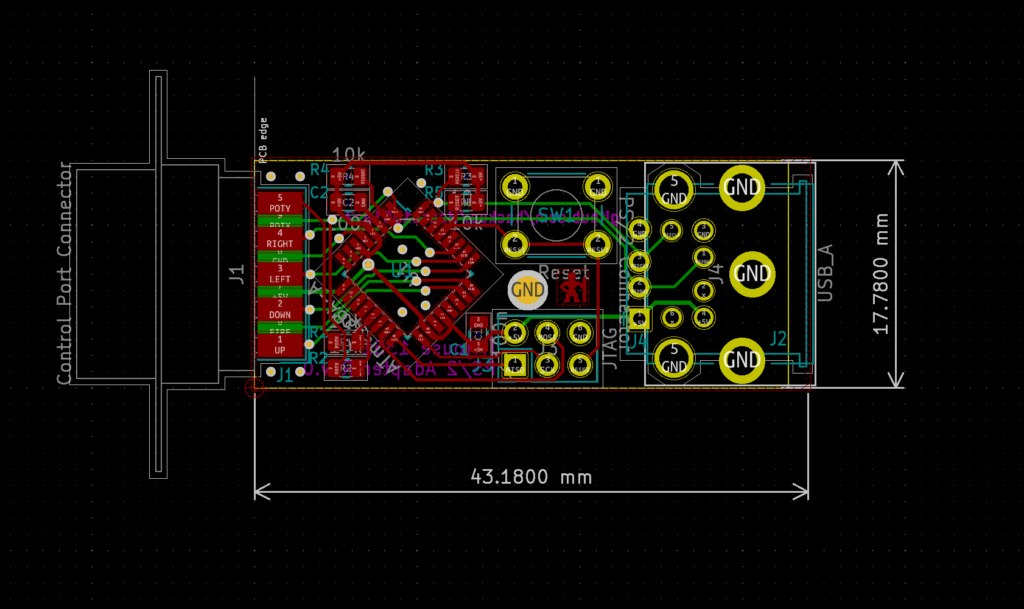 There is a variety of difference PCB layouts out there for this project. Some are still available for DIY purposes, others assembled and commercially available. But where’s the fun in using something ready-made if you can make your own? 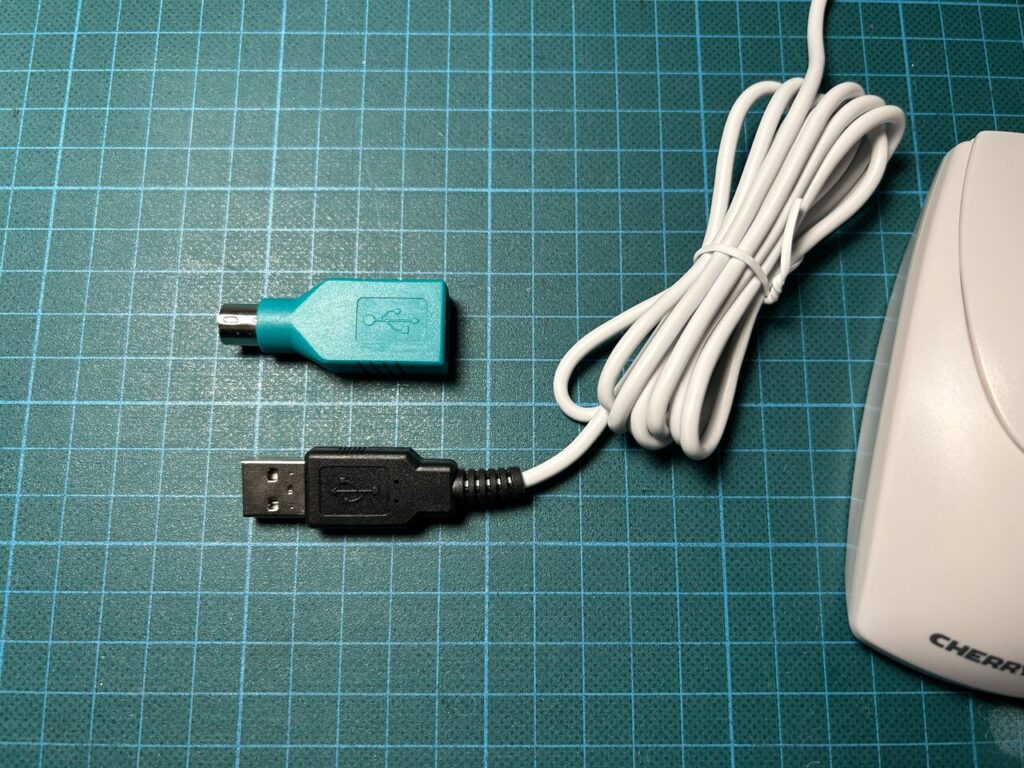 A mouse that can speak both USB and PS/2 and the passive adapter.

So, I fired up KiCAD to create my own rendition of the [M]ouse 1351 adapter. The result is quite compact. The electronic components are all SMD and located on the top side of the PCB. This allows for the boards to be partially assembled by the PCB manufacturer. The remaining three mechanical components on the other hand are through hole types (in a broader sense) and have to be soldered by hand. The 9 pin D-sub connector to be plugged into the control port of the C64 goes on one end, and the 6 pin Mini-DIN connector (aka. PS/2) connector on the other. 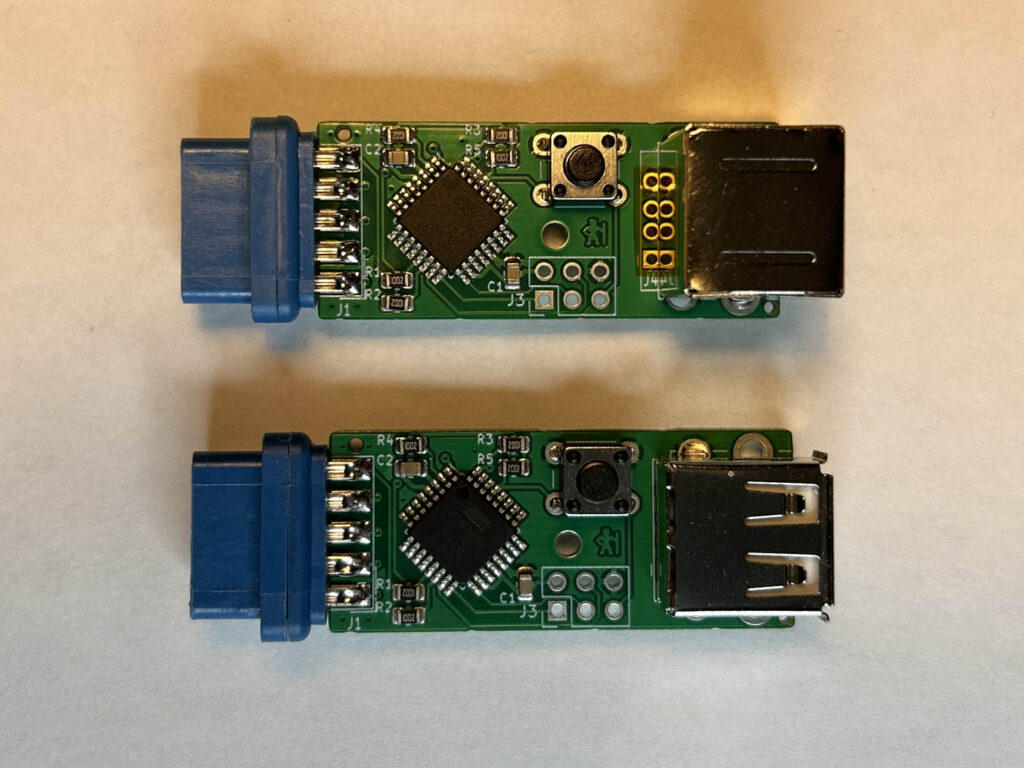 The two variants of the Mouse 1351 adapter board.

Most PS/2 mice still available today are actually USB devices that are able to fall back to the PS/2 protocol. They usually come with a passive adapter of green color with a USB-A socket on one end and a male PS/2 connector on the other. To avoid having to daisy-chain both adapters, a USB-A socket can be fitted directly onto the Mouse 1351 adapter PCB instead of the PS/2 connector. Keep in mind though, that still only PS/2 capable mice will work. 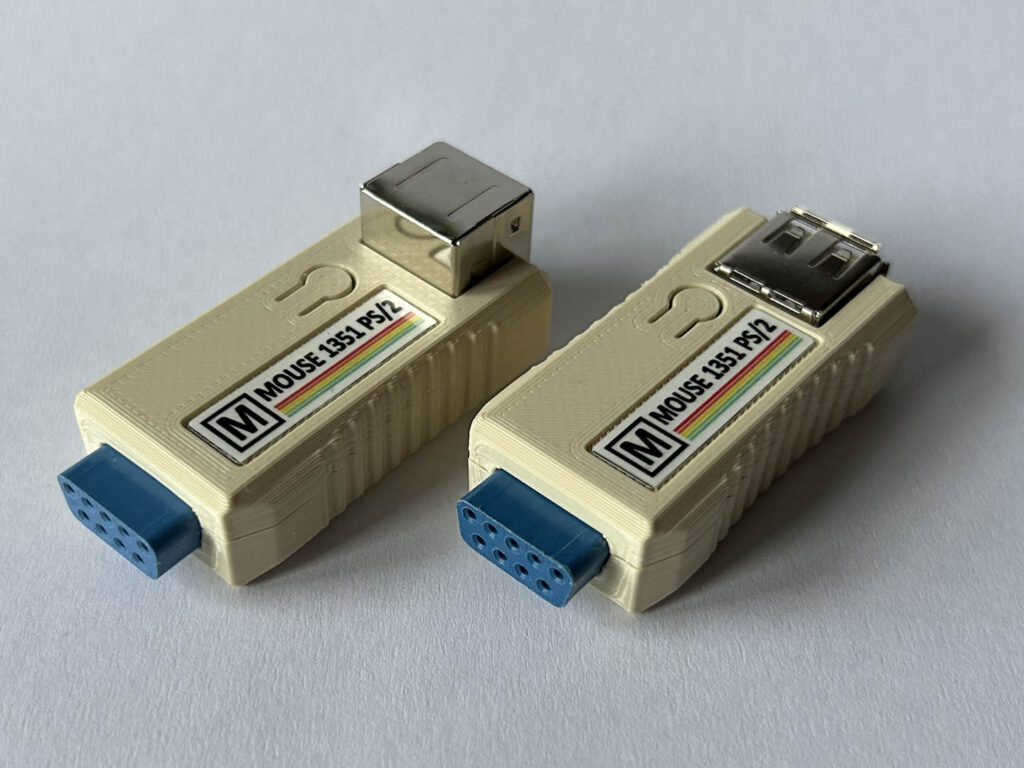 The finished adapters with their enclosures.

Last but not least, I also designed a custom enclosure to fit my adapter board. The case is quick and easy to print on any FDM printer, and held closed by a single 2x8mm self tapping screw.

As with most of my projects, I will share both the KiCAD files for the PCB and the STL files to print the enclosure, soon. They still require some cleaning up first, though.